I hadn’t been on a month-long travel adventure since my ‘OE’ through Europe in my late twenties.  So, after a three-year stint as President of the NZILA, I knew I needed something to break the ‘lifestyle’ that I had become accustomed to.  I needed to get grounded again.

The answer for me was the 2022 Tour Aotearoa Brevet (TA), a cycling odyssey from Cape Reinga to Bluff.  The annual event follows a path from the very north to the very south along a predetermined, mainly off road route.  The rules for the Brevet are simple – follow the route visiting 30 photo-points along the way, non-supported (carry your own gear) and finish the 3,000km trip between 10 and 30 days.

It was a calculated risk to make my way north to Cape Reinga by bus and shuttle as Omicron tightened its grip on communities around the country, especially from Auckland northwards.  I figured if I could get to Cape Reinga without catching it during peak infection then spending the next month on my bike in the open air was a safe place to be.

Ninety Mile Beach is a perfect way to sieve out those who don’t have the determination to finish the route – especially with 80km of riding on the sand into a brisk south-wester headwind.  After the awakening of the first day, the day-two 142km chapter around and across the Hokianga harbour and through the Waipoua Forest included over 2,200m of climbing – the toughest climbing day of the whole ride.

The trip through the North Island included urban cycleways through Tamaki Makaurau, the flat plains and river banks of Hauraki, tough, hilly single track and four-wheel drive tracks through the western interior -  the Timber Trail and the Mangapurua tracks, which eventually gave way to the Whanganui River Valley and the flat productive rural landscapes of the Manawatu and the Wairarapa.   The trip over the Rimutaka incline and down the other side into the Hutt Valley was a highlight where I was joined by some very vocal and welcoming tui and some colleagues from our Te Whanganui a tara studio, including an additional tour of some of the recently completed urban cycleways around the harbour.

As I crossed the Cook Strait on the Bluebridge ferry, the best was yet to come – the less familiar and even more spectacular landscapes of Te Wai Pounamu.  The first part of the South Island was through the Queen Charlotte Drive and then up and over the Maungatapu Saddle from Pelorus Bridge.  The landscape was beautiful, the tui were calling again and the hill was massive. The top 2km of the saddle track is so steep and loose it’s unrideable on a fully loaded touring bike, so we spent a bit of time pushing our bikes that day.  This was the toughest hill of the whole ride.

The beech clad landscapes and clear rivers of the Nelson Lakes and the Buller District were a real contrast to most of the lower North Island.

As I rode into Murchison at the end of my second day in the South Island we were all dealt a reality check that stopped us in our tracks.  One of the riders I started with at Cape Reinga and had gotten to know through the first two weeks of the TA suffered a fatal heart attack on the side of the road.  It was a stark reminder to everyone around us on the TA to live every day to the fullest because you just never know.  Seize the day and finish the ride for those that couldn’t were thoughts on my mind for the rest of the journey.

The west coast of the South Island delivered even more spectacular landscape, rivers, streams and lakes.  The Wilderness Trail – a mainly off-road trail of 140km from Greymouth to Ross was a real highlight – again clad in beautiful beech and podocarp forest ringing with the sounds of native birds calling us on. 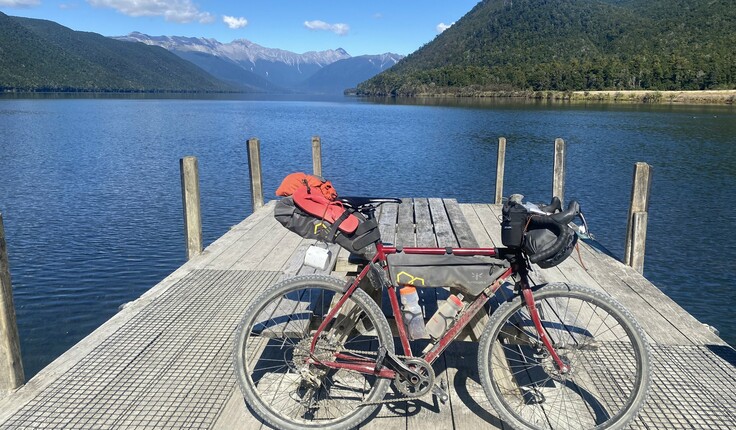 Buller and less familiar landscapes were a dream to ride through. 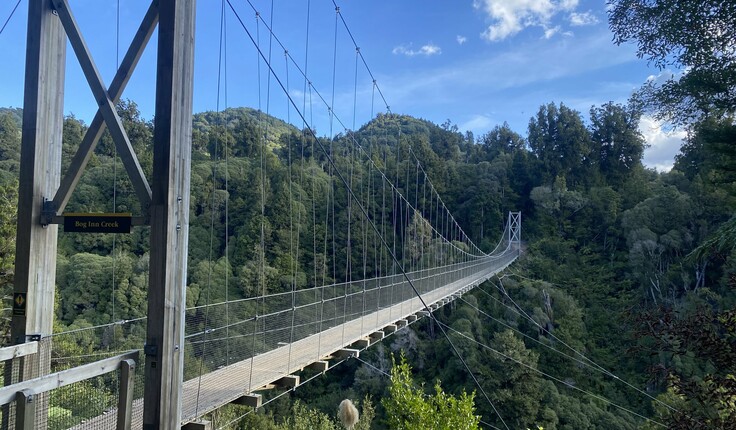 The western interior of the North Island provided some of the best off-road cycle tails along the journey.

My favourite day of the whole TA adventure came as I rode out of Haast through the gates and the pass and along the edges of Lakes Wanaka and Hawea into the Upper Clutha basin.  Haast delivered the only rain for my month in the saddle.  A few hours of steady rain in the morning brought waterfalls and creek beds to life as we climbed up through the steep incline which was overhung on all sides by tall native forest.  The second half of the day was a complete contrast – bright clear blue skies and sunshine after Makarora as we entered the Queenstown lakes area.  The 152km day included 1,800m of climbing and was one of the longest and most memorable of the journey.

The climb over the Crown Range brought me to the highest point in the ride, 1,076m into the blue skies above the Wakatipu Basin and the Cardrona Valley.  The view in both directions was a fitting reward for one of the longest climbs you can do on a bike in Aotearoa.

The Queenstown trails from Arrowtown along the Arrow River and the Kawarau and Shotover Rivers were a great way to enter the tourism capital of the South Island.  Riverbank cycle trails are opening up landscapes throughout Aotearoa and those rivers are as good as any to cycle along.

Leaving Queenstown delivered another day of contrasts – a chilly early morning trip across Lake Wakatipu and through the Walter Peak and Mount Nicholas Stations and up and over the Von Hill to the Mavora Lakes.  The Von Hill was the last decent hill climb of the tour.  After the Mavora Lakes the flat and fast gravel road turned into 25km of heavy corrugations which took their toll on bikes and riders.

The last day and a half through Southland was relatively flat and gave us time to pause and reflect on our journey.  I imagined a quiet contemplative moment as I rolled into Stirling Point, but the place was packed with riders and supporters on a beautiful blue-sky Bluff day.  Celebratory oysters and beers were on the menu before I made my way back home to the Bay of Plenty to see my whanau.

My original aim was to complete the trip in 26 days, with a rest day in Wellington.  I rolled into Stirling Point at Bluff on day 27, feeling very satisfied with my (nearly) month in the saddle.  One of my original aims was also ‘check’ the lifestyle of the last few years.  I lost 12kg in training over 12 months or so and another 4kg over the course of the ride, so I’m feeling much lighter and fitter for the experience.

After such an epic journey I was left with a head full of superlatives and cliches that I have been trying to sort into some kind of order as to why cycling the length of the Aotearoa has been such a life affirming experience for me.

Moving through the length of the country in less than 30 days was special. What was unique for me was not just experiencing Aotearoa from the saddle of a bicycle but being exposed to the elements along the entire journey.  You couldn’t hide behind a windshield.  If the sun shone you were hot, if it rained you got wet and if the wind was blowing it either helped you or hindered you.  There was no hiding from nature.  That elemental experience created a whole different level of engagement with the landscapes and the places along the way.

Since the ride I’ve been back in the studio, picking up the work I put down before I left, while I contemplate the next challenge.  TA was inspiring and perhaps an introduction to a new way of seeing the world.